Child abuse is not an issue that makes for light reading but it is happening far too often in Ghana to ignore. These news stories highlight the depth of the problem and why our work is so important. 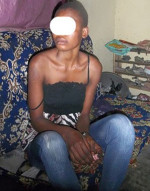 A 17-year-old female student of Takoradi Senior High School (name withheld) has confessed to DAILY GUIDE in an interview that her biological father has been having sexual intercourse with her for the past nine months.

The girl claimed that she was a virgin but her father, who was sojourning in Spain and returned to Ghana in December last year, broke her virginity at his Adiembra residence near Sekondi, where he had sexual intercourse with her on several occasions. READ MORE

An 11-year-old girl who lives with her grandparents at Kpeshie in Accra was asked to sit in a pot of boiling water for wetting her bed overnight.

These grandparents tortured and watched their own grandchild go through the agony of sitting in the water until she was badly burned. And after conducting such an evil act, they didn’t even bother to send her to a hospital, instead they kept her in the room to try and conceal their evil deeds. READ MORE

An unemployed man who thought the best way of bringing up his seven-year-old physically challenged son was to chain him with three dog chains attached to a shade in his compound would have to explain his actions in court.

The accused person, Issah Hamza, allegedly kept his son tied in his compound till he cried, attracting the attention of neighbours and also often left his son’s food uncovered for flies to feed on. READ MORE

A 37-year-old father, Jonathan Samuel Otto Hughes, was on Tuesday remanded into police custody by a Takoradi Circuit Court, for allegedly abusing his 17-year-old daughter sexually.

The accused was charged for incest and child abuse. His plea was not taken and would reappear on September 4. READ MORE